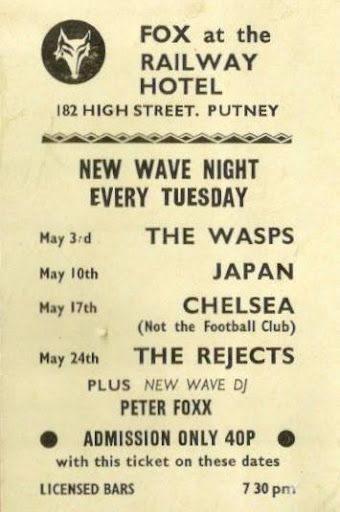 Wasps front man Jesse chatting to DJ Peter Fox on his Sunday night show "Foxy Radio" on Deal Radio, on Sunday 17th October 2021. They talked about the newly revamped Wasps, their soon to be released single "It Don't Matter To Me" from their forthcoming new album "Punk Prayer". PLUS! talking about the back story of The Wasps 1976-1979.

The show was  released on Mix Cloud as well as available Foxyradio.com website.

You can listen again to Jesse Lynn-Dean's interview on Foxy Radio show on Deal Radio. Jesse chats about The Wasps past, what they're up to now and featuring new tracks from the new album "Punk Prayer", plus a classic Wasps track and one of Jesse's favourite post punk songs of the 80's.

Jesse's interview starts at 23 minutes into the show. Peter Fox always put on a very entertaining show in his own inimitable style!

Foxyraxdio.com was started in May 2019 by DJ Peter Fox. He had quite a reputation in the music business and commenced his professional DJ journey way back in 1977 working at Croydon’s Greyhound, Camden’s Music Machine (now KoKo), The Zig Zag Club and many more. Foxy Radio started as an independent radio show.

As the show grew and became more popular it gained top Mix Cloud global chart positions and he had to recruit a team of helpers. In March 2020 Foxy Radio then joined forces with Deal Radio meaning he now put together a weekly, 2-hour, pre-recorded show which goes out exclusively on www.DealRadio.co.uk on Sunday evenings at 8:00 – 10:00 p.m. and released on Mix Cloud on Monday, as well as being put onto the Foxyradio.com website and advertised on social media.

The Wasps had the pleasure of meeting DJ Peter Fox at their performance at the Railway Hotel, Putney, London on the 3rd of May 1977 & then again on 24th May 1977.